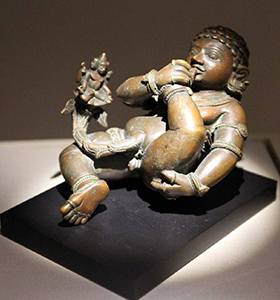 The first time it appears is just after Krishna is born and his father Vasudeva is ferrying him across the river Yamuna to Gokul. Krishna is in a wicker basket, sucking the toe of his left foot.

While people spend their entire lives searching for happiness outside of themselves, with this symbolic image, Krishna reminds us that the source of true happiness lies within. He is sucking happiness from his toe.

The feet connect us to the world. They symbolize movement, travel, venturing outwards. The mouth is the symbol of taking in. We move in the world to collect impressions and we digest those impressions to collect experience.

When baby Krishna is sucking his toe, it is symbolic of the circle of totality from which the universe emerges. It echoes those opposite forces, complementing and merging into each other.

We must note that Krishna was born inside a jail, and at the moment of his birth, the doors of the jail opened automatically. This reinforces the idea that we can only attain a higher state of consciousness when we are free of the prison of our conditioning. A child born fully conscious has no conditioning and is therefore not imprisoned in any jail.

As Vasudeva crossed the Yamuna, the forces of nature erupted. It was as if nature could not contain itself over the birth of this divine and beautiful child. The Yamuna, which until the night before was just a small stream of water, had risen in flood. Vasudeva placed the wicker basket in which he was carrying Krishna, on his head to protect the baby, yet the flood waters would rise up to touch his lotus feet. There was lightning and thunder in the skies and the rains fell down in torrents. Everything was at its highest intensity.

The divine serpent Sheshanaag then arose from the waters and covered the basket with his five-faced hood to protect the child from the rain. The serpent is the symbol of the rising of the Kundalini energy. That is when the creative energy returns to its source and merges with it. But the child is oblivious to all of this. He is sucking his toe in total bliss.

Markandeya and the Beginning of the Universe

The second time we see this scene of Krishna sucking his toe is when the rishi Markandeya recounts his vision of the end of the universe and the beginning of the new.

One evening, the sage sat on the bank of the river Subhadra for his evening worship. He was sitting at the point where the river met the sea. The waters of the sea began to rise and very soon swept him away, but he did not drown. Instead, the whole universe began drowning into the ocean, Markandeya floating along with them. When there was nothing left but ocean on all sides, he saw a leaf of the Banyan tree floating in the water. On the leaf, he saw a young child who smiled at him.

While the universe had resolved back into its source, the child was happily sucking his toe. The child invited the Rishi to come near him. When he did, the child swallowed him.

Markandeya found himself in the child’s belly, and there he saw the whole universe again in miniature form. He saw that there were so many worlds, the sky, the seas, and all the aspects of Existence. He saw the gods, the demons, the animals, the plants, and humans. He saw his ashram, and he saw himself sitting in meditation. Markandeya realized that the child was none other than Krishna, and he had been witness to the dissolving and re-appearing of the universe.

Krishna offered Markandeya to ask him for a boon. Markandeya said he wanted to see what is maya or illusion. The child exhaled and Markandeya came out of his belly and was on the banks of the river, doing his evening prayer.

In that moment he realized everything is illusion, except the experience of the Seer inside. And that Seer is the Lord Krishna, floating on the leaf and sucking his toe, creating the cycles of life and death and dissolution and appearance.

The left represents the internal—the inner movement of attention. It relates to the inner soul and spirit, our higher centers. The right represents the worldly—that which is outgoing, relating to people outside.

We have seen the symbolism of the young Krishna sucking his toe. If we can understand it deeply, then maybe we will find ourselves in his belly, looking at the deepest mysteries of life.