We use our epic texts as the cornerstones of our faith and values. They are stories that provide engaging richness of characterization and plot progression. Beyond this, they are treatises on religion, morality and philosophy, which form the bedrock of civilized society. We must examine and experience the Mahabharata in both these lights concurrently in order to fully derive the depth of meaning with which it is laden.

The Mahabharata opens with King Janmejaya performing a snake sacrifice, with the ultimate aim of destroying all snakes on earth. Why did Janmejaya take on such an extreme task? Years ago, Janmejaya’s father, King Parikshit, was hunting in the forest. Tired and thirsty, he came upon a sage deep in meditation. Parikshit entreated him several times to give him some water, but the sage remained oblivious. Feeling insulted, Parikshit wrapped a dead snake around the sage to insult him in turn. Just then, the son of the sage entered the scene and was enraged at the defiling of his father’s body. He cursed Parikshit that he would die of snakebite within 10 days. And, so it was. At that time, Janmejaya was a mere boy, but upon attaining manhood, he swore to avenge his father’s death by killing all snakes on earth. 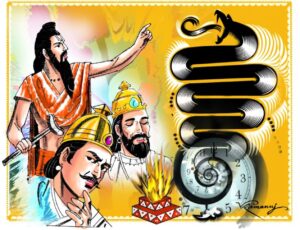 As the yagna proceeded, snakes everywhere were dragged from hiding and consumed in the sacrificial fire. However, before the yagna could conclude, a sage, Astika arrived on the spot and advised Janmejaya to discontinue it. Janmejaya acquiesced, but his anger did not subside. At this time, Vaisampayana, the disciple of Rishi Ved Vyas entered and began to narrate the story of Mahabharata to Janmejaya, making him aware of his ancestry from the Pandavas and awakening in him a deeper, more complete view of life and its purpose. When Janmejaya learnt the truth that was Mahabharata, his anger ebbed and he felt happy he had stopped the yagna.

With this preamble, the narration of Mahabharata begins, and it is interesting to discover the layers of meaning behind this enthralling but mystifying story structure.

‘Janmejaya’ is the amalgamation of ‘Janma’ meaning birth and ‘ajaya’ meaning always victorious in battle; in effect, one who is victorious over the process of birth and death, or the self.

We experience time moment by moment, through our five senses, and are misled into thinking it is a continuous, linear experience. Just like a camera captures frames, and running these frames quickly gives the false impression of motion, so it is with us. All our sensations of time are in the ‘here and now’, yet we feel of them as if they are a combination of yesterday and tomorrow. This is the first illusion.

We live in the present, but our consciousness, the inner self, is seldom in contact with it. In our day-to-day actions, we are either busy comparing ongoing sensations to those already experienced, or preparing ourselves for sensations yet to come. While we are chatting with friends so warmly, we are jealous of the new car they have bought. While we eat a meal, we are busy planning the day tomorrow. It is a play between imagination and memory. Sometimes, something truly ethereal moves us; a beautiful sunset, a child’s innocent remark, the look in a loved one’s eyes: then, all imagination and memory stops and our awareness docks with the present moment. The feeling at that moment is overpowering, a feeling of eternal ‘now’, of flying high like an eagle or Garuda (the symbol of this other dimension of time). Sadly, this is only momentary. Again, the ‘now’ is lost in the ‘before’ and ‘after’.

Meditation raises the awareness of ‘now’ and reality of the present. At heightened awareness, the linearity of time, formed by connecting the illusionary dots, stops, and in our minds we enter into another dimension.

We are so hypnotized by our time that we never stop to think of the possibility of another aspect of time. We can break this hypnosis by ‘sacrificing’ the past and future into the ‘fire of the present’.

Connect with the now of events as they occur, not with their past. If someone insulted us yesterday, and upon seeing him today the same feelings arise again, then the snake has hypnotized us. Consume this snake into the awareness of ‘now’.

The Rishi’s commencement of the Mahabharata with this scene is the signal of an inner journey, within our minds and to higher levels of consciousness, the journey of Now to Eternity. This will open a new vision in us and allow us to see the events of this great epic in a new light.