Our effort as students of spirituality is to merge with the inner master Sri Krishna. He is the epitome of consciousness and his life is rich with symbolic episodes that hide the deepest mysteries of life. Let’s understand a few aspects of his life and unravel for ourselves the truth behind them.

Devaki’s cousin, Kamsa (pronounced Kansa), an evil tyrant, had taken over the kingdom of Mathura after imprisoning his father, King Ugrasena. A voice from heaven had forecast that Devaki’s eighth child would kill Kamsa. So, he imprisoned Devaki and Vasudeva, her husband. Kamsa had their seven children killed, one after another. Krishna was the eighth child and before Kamsa’s evil hands could kill him, the prison doors opened and Vasudeva escaped with Krishna, crossed the river Yamuna and exchanged him with Nanda’s daughter. 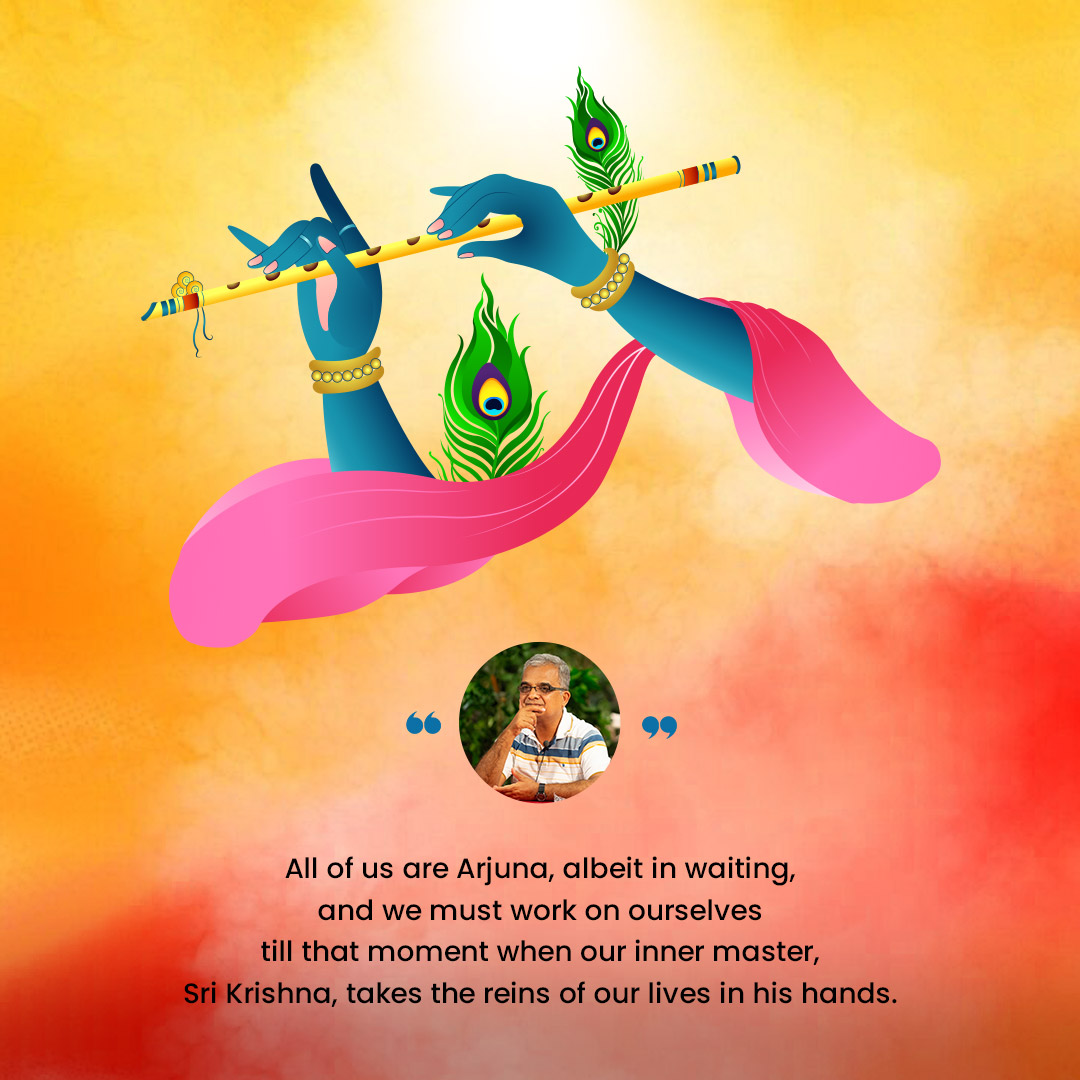 Devaki allowing her seven children to be killed by Kamsa is symbolic of the voluntary suffering a disciple undergoes to awaken consciousness within the body-brain system. The opening of the prison doors shows that consciousness cannot be detained, implying freedom from the imprisonment of our own samskaras (conditionings). Yamuna is the river of divine love or bhakti; crossing the Yamuna is akin to dissolving the ego.  On one shore is the prison of Mathura and on the other is Nandgaon, the village of joy. This means that the path to real joy is by dissolving the ego.

While crossing the river, the waters rise to touch the child Krishna’s feet, symbolising how nature surrenders to the one whose soul has merged with spirit. He is sucking his big toe, creating a circle; this shows that he is getting joy from within himself, independent of what is happening outside. Our happiness is always dependent upon something outside.  Seshnaag, the big snake, is protecting Krishna’s face; the snake being a symbol of time, implying that time is a slave of consciousness. In our lives time is a tyrant, binding us into slavery.

Nandgaon is an idyllic setting where Krishna grows up. Here, there is joy playing with the cowherds (gopas) and the young women (gopis).  This is very symbolic because gop means our sense organs and gopi means to drink with the sense organs; pi for pivu (to drink). Our senses work with the energy of sensitivity, which we waste in excitement. If we can free the senses from excitement and expand the energies of sensitivity to that extent where they can extract joy from every event in life, we have mastered the real art of living. This symbolic dance which Krishna plays with the gopis, drinking each event of life with his five senses and extracting the cream from them is called raas and the cream he extracts is ras, the elixir of life. That is why he is called makhan-chor, the one who robs cream. His childhood is filled with stories of how he killed different rakshas or demons, signifying different forms of negativity within us, which every disciple has to kill.

Kamsa sends Puttana, his foster nurse to kill Krishna. She applies poison to her breasts and feeds the child Krishna. Pu means purification or purgatory. Krishna drinks her poison and instead of him, she dies. This is the art of converting negative energy into positive or negative situations in life to positive ones.

When he is eleven years old, the time has come to go back to Mathura to kill his uncle, the king Kamsa. The word Kamsa means a ‘drinking vessel’. It comes from the root kaam which means ‘desire’. So here is a king who is drunk with the wine of the desire to be the most powerful person in the world. This desire lies in all of us and must be killed before we advance to higher levels of yoga.  Kamsa was a personification of a demon, Kaalnemi, meaning time in a circumference, or time-bound. We want to fulfil all our desires in as little time as possible. The irony is that we all feel in this life we will fulfil all our desires, despite knowing very well that no one has ever fulfilled all of theirs. Till we are free of this attitude, we cannot wake up to the dream of life. Krishna kills Kamsa in a hand-to-hand wrestling duel, which shows that we have to struggle hard to come to the state of desirelessness.

Krishna’s life as a child, on a small scale, is a play or a leela of something that takes place later on a larger scale in the Mahabharata. Every event that happens in the life of the Pandavas has in essence, happened in some way on a smaller scale with Krishna in his younger days. He has lived the full circle of life’s experiences and when he enters the stage of the Mahabharata, even though young in years, is wise in experience. Thus, he easily takes the reins of Arjuna’s chariot and sails him through the upheavals of the eighteen-day war.

All of us are Arjuna, albeit in waiting, and we must work on ourselves till that moment when our inner master, Sri Krishna takes the reins of our lives in his hands.

The author can be reached by emailing 3srb@live.com