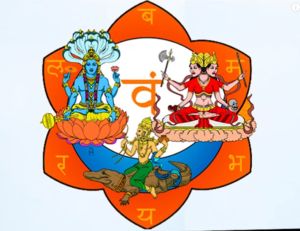 Let us continue exploring the deeper meaning behind the symbolic representation of the Svadhisthana Chakra.

The author of the Sat-Chakra Nirupana, Purnananda Swami, says that, besides the muladhara, there is another lotus situated inside the Sushumna, at the root of the genitals. This lotus and its petals are vermilion in color.

It is very interesting to note that the word Purnananda Swami has used for लं (laṃ) is Purandharaantaih i.e. the end of that which is full and flowing down. However, one may wonder how लं can be ‘the end’ if there are letters following it (The Sanskrit alphabet does not stop at लं), Herein lies a very deep mystery. What the author was suggesting is that the involution of letters stop at लं. And the letters that follow after लं are part of the upward or evolutionary cycle.

Drawing a parallel with Mr. Tavaria’s great book, The Purpose of Birth and Death, we can understand that upto लं, the letters chart the downward arc of our spiritual journey. From लं onwards, the other letters form a part of the upward arc, which is a part of natural evolution. This is the evolution that Charles Darwin talks about.

Let me try and explain this in another way.

The story goes that Lord Shiva wanted to create the universe, but he didn’t do it himself. Instead, he created Shakti and gave her the task of creating the universe. To perform this task, she divided herself into fifty-one coils which became the letters of the Sanskrit alphabet. In the involution of Shakti, she took fifty-one turns around the backbone, moving downwards from the first letter to लं, which is the seed mantra of the Muladhara. At लं, she stopped moving down and turned back upwards, moving up the letters वं vaṃ, शं śaṃ, षं ṣaṃ, and सं saṃ. These are the petals of the Muladhara which rise up. So, the letters of the Muladhara are the beginning of natural evolution. To begin conscious evolution, we must rotate both the Muladhara anticlockwise and Svadhisthana clockwise, together, making the figure ‘8’.

Within the lotus is a watery region depicted by a half moon. Water is the element of the Svadhisthana chakra. This is the region of Varuna, the Lord of the oceans. We see him seated atop his vehicle, the crocodile. The crocodile is that which swims through life. It signifies those emotions which cause us to become short-tempered and snappy. In the lower realms of consciousness, these are hidden negative emotions between the conscious and subconscious minds. In the higher states of consciousness, it signifies the ability to balance the duality of the conscious and subconscious minds.

We have seen that the primary emotion or driving force in the Svadhisthana chakra is Kama or Desire. We see that Varuna has a lasso (pasha) in his hand, signifying the ability to bind desire, to control it. It represents the power to bind the enemies of greed (lobha), desire (kama), anger (krodha), infatuation (moha), jealousy(mtsya) and ego intoxication (mada). In his other hand, Varuna holds a vessel filled with precious gems.

Above the crescent moon is the mantra वं (vaṃ). This is the bija or seed mantra of the Svadhisthana chakra. A consciously created humming sound. As we have seen, this humming immediately affects our vagal tone, and awakens its higher qualities.

Even though he is depicted as being on the side, within the bija mantra sits Vishnu as Hari. The one who kills the negativities, the one who cuts off the roots of karma. Hari also means yellow and we can see that even though his body is a luminous blue, he wears yellow clothing. He is four-armed, holding the Sudarshan chakra, the mace, the lotus and the conch shell in each hand. He wears a beautiful garland with the Kaustubha gem in the center, which symbolizes consciousness and shines like a thousand suns. Just above the Kaustubha is a beautiful curl of hair called the Sri Vatsa, which shines like ten thousand moons. It symbolizes Hari’s consort and shakti, Lakshmi. It reminds the seeker that as he rises in consciousness, he must learn to balance it with its reflection or Prakriti.

Lord Vishnu’s conch shell, which he holds in one of his hands, is called the Panchjanya, which means born from the five. It gives total control over the five elements. We see here that by mastering the Svadhisthana chakra and transforming the indulgence of sex, many qualities awaken in the seeker.

The origin of this conch shell can be traced to the story of Sri Krishna killing the demon Panchan. Sri Krishna makes the Panchjanya shell from the demon’s bones. It is said that the sound of Om that vibrated with the creation of the universe was created through this shell.

The word for shell is shankha. Its root word means to calm, to create something auspicious. And kham means water. As we have seen, the water element resides in the Svadhisthana. The vibrations emanating from blowing the shell affect the water element in its immediate surroundings, giving them a definite structure and vibration.

In another hand, Vishnu holds the Sudarshan chakra. This is the weapon of Vishnu. We have read and heard many stories of the use of this chakra. Su means good, auspicious and darshan means perception. Right observation. The student of spirituality, through a long process of right self-observation, reaches a state of auspicious observation. That is, he has conquered the lower negative emotions, the animal passions. In other words, he has used the Sudarshan Chakra to reach a state that whatever he observes becomes auspicious. It destroys the ego and all its negative manifestations.

Vishnu means to penetrate. Auspicious vision means to be able to penetrate through all the facts of life and discern the truth behind the seen facts.

We will stop here and continue next week with the significance of the mace and the lotus which Lord Vishnu holds in his other two hands.